Small business owners finding their next new thing
BY MILDRED L. CULP
Saturday, August 16th 2008, 4:00 AM
It may take just one great product to launch a business but, sooner or later, many entrepreneurs find they need a follow-up product to sustain their success.
Your Money talked to three New York small business operators, each of whom built on early success by continuing to innovate — giving their companies new momentum.
Deon Leftenant
Deshalamar Enterprises : Sports fans have long seen the dreadlocks of Manny Ramirez and many other players flowing from under his cap. Plumber-turned-entrepreneur Deon Leftenant has a product that can help superstars and regular folks who sport the same look keep their dreads under control. Leftenant, 47, of Brentwood, L.I., invented Locks Down, a line of wraps targeted to that market. He got the idea watching Jamaican construction workers battle to keep their hair out of their way. Last September, he launched his product through his newly formed company, Deshalamar Enterprises, which is based in Central Islip, L.I. "It's something to wrap your hair in, eliminating the need for a bandana or scarf," he said. Made of cotton and terry cloth, Locks Down sells for $15 to $18. Leftenant, an Army vet, uses the American flag on some of his product. His customers gave him the idea for his next innovation."People kept saying they wanted to jump in the shower and go about their day without getting their hair wet," he said. His solution was a water-resistant version made of umbrella fabric. That one sells for $20 to $25, and Leftenant hopes it will increase sales by 30%. It launched in May at the Locks Fashion Show at the National Black Theatre of Harlem. The fledgling business, which Leftenant started with $35,000 of savings, is still working its way out of debt. But now he has hopes for financing."We're meeting with some investors," he said. "I couldn't get anyone to help before, but now everyone is coming out of the woodwork." 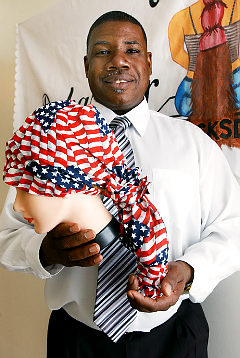