Brentwood businessman sells hair-braid idea
BY GARY DYMSKI | gary.dymski@newsday.com
September 8, 2008
As the drywall installation crew - mostly Jamaicans in dreadlocks - was finishing its job four years ago, Deon Leftenant wondered how much easier the task might be if only for their hair. "They kept getting dust on their hair during sanding," Leftenant said, "and it was just a hassle for them to work that way."

With the struggling group at a Westbury construction site as inspiration, Leftenant, 48, of Brentwood, hatched his idea for Locks Down, a wrap for securing the long hair of active people, especially athletes and laborers, in ponytail fashion.

As Leftenant has pitched Locks Down at festivals and trade shows, many have asked the plumber-turned-entrepreneur if baseball slugger Manny Ramirez was the inspiration. But Leftenant conceived the idea unrelated to Ramirez's growing his locks and helping his team, the Boston Red Sox, win the 2004 World Series.

Leftenant said while Ramirez's locks could benefit from the wrap, Locks Down is not just for dreads. "It's for anyone whose long hair gets in the way."
Since the prototype, Locks Down has been streamlined. Snaps have replaced tie-downs, and the ponytail's tip can be left exposed or covered in a folding pocket. Locks Downs sell from $10 to $50 apiece, depending on material, including terry cloth, silk, satin, leather, cotton and a stretch polyester blend, at locksdown.com.

So far, Locks Down has been a mild seller at a handful of ethnic festivals and trade shows. Leftenant said his best success was selling about 100 at an Atlanta trade show in late April.

Traditionally, wraps in the black community were used to help keep hair straight, said Pamela Edwards, beauty editor at Essence magazine. "Back in the day, people would not be caught outside with their hair wrapped," she said, "but over time things have changed, and it's become trendy, fashionable."

Locks and long hair can be heavy and hot, Edwards said, and it appears Leftenant has found a way to fashionably cover hair when people are at work or play.

Athletes in dreads, like Ramirez and some professional and collegiate football players, generally use skull caps and do-rags to keep hair tightly confined.

Because the latest version of Locks Down is lighter and less bulky, Leftenant, who has invested more than $20,000 in the project, thinks he's close to bust-out success. His business partner and friend, Clarice Miller, 38, also from Brentwood, hand sews all the Lock Downs, but they are working to have them mass-produced by a Chinese manufacturer. 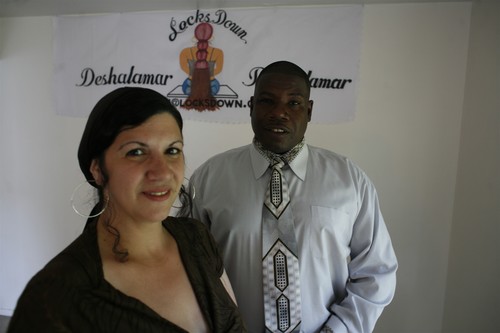 Leftenant expects to visit a prospective investor from North Carolina later this month. "It's been a slow process," he said, "and we're still very much in the red, but I am confident."

And what might make Locks Down really take off? "Maybe if I got one to Manny Ramirez," Leftenant said.